Direct numerical simulations of incompressible homogeneous-isotropic turbulence laden with a dilute suspension of inertial point particles are performed in conjunction with a wavelet multiresolution analysis of the results. The use of spatially localized wavelet basis functions enables the simultaneous consideration of physical and scale spaces in the spectral characterization of the flow field of the carrier phase and the concentration field of the dispersed phase. The multiresolution analysis of the dispersed phase provides statistical information about the spatial variabilities of a scale-dependent coarse-grained number density field and the local energy spectra of its fluctuations, characterizing the sensitivities of those quantities to variations in scale and Stokes number. In particular, the spatial variabilities of the wavelet energy spectrum of the particle concentration fluctuations are observed to be maximum in regimes where the particles preferentially concentrate. The results highlight the scale-dependent inhomogeneities of the structures in the concentration field generated by preferential concentration, and the existence of characteristic scales of interaction between the dispersed and carrier phases. Additionally, an interphase multiresolution analysis is performed that indicates the occurrence of a spatial anticorrelation between the enstrophy and kinetic-energy spectra of the carrier phase and the particle concentration at small scales in regimes wheremore » preferential concentration is important. In conclusion, this anticorrelation vanishes as the scale is increased and is largely suppressed when the preferential-concentration effect is negligible.« less 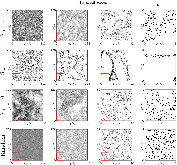 FIG. 1: Spatial distribution of particles (black dots) in a two-dimensional cross section of thickness equal to one Kolmogorov length for three different Stokes number: Stk = 0.1 (first row), Stk = 1 (second row) and Stk = 10 (third row) obtained from DNS of particle-laden homogeneous-isotropic turbulence (see Sec.more » II for further details on the computational set-up). The fourth row corresponds to randomly distributed particles with the same total number of particles as above. Second to fourth columns are ×4 magnified view of the solid-red-line contoured subregion in the nearest left column. The first column represents a full-scale cross-section of the entire computational domain.« less
All figures and tables (10 total)
Export Metadata
Save to My Library
You must Sign In or Create an Account in order to save documents to your library.

Wavelet Transforms and their Applications to Turbulence
journal, January 1992

Preferential concentration of particles by turbulence
journal, May 1991

Analysis of the clustering of inertial particles in turbulent flows
journal, December 2016

Modeling the effects of small turbulent scales on the drag force for particles below and above the Kolmogorov scale
journal, March 2018

Aerodynamic focusing of particles in a carrier gas
journal, October 1988

Analysis of turbulence in the orthonormal wavelet representation
journal, November 1991

Large-eddy simulation of turbulent collision of heavy particles in isotropic turbulence
journal, May 2010

On the motion of small particles in a potential field of flow
journal, February 1956

A nonlinear model for the subgrid timescale experienced by heavy particles in large eddy simulation of isotropic turbulence with a stochastic differential equation
journal, March 2013

On the physical mechanisms of two-way coupling in particle-laden isotropic turbulence
journal, February 2003

Structure of a particle-laden round jet
journal, March 1992

Can turbophoresis be predicted by large-eddy simulation?
journal, January 2005

A subgrid model for clustering of high-inertia particles in large-eddy simulations of turbulence
journal, April 2014

The role of separation of scales in the description of spray combustion
journal, January 2015