Title: Precision measurement of the weak charge of the proton

Large experimental programmes in the fields of nuclear and particle physics search for evidence of physics beyond that explained by current theories. The observation of the Higgs boson completed the set of particles predicted by the standard model, which currently provides the best description of fundamental particles and forces. Yet, this theory’s limitations include a failure to predict fundamental parameters, such as the mass of the Higgs boson, and the inability to account for dark matter and energy, gravity, and the matter–antimatter asymmetry in the Universe, among other phenomena. These limitations have inspired searches for physics beyond the standard model in the post-Higgs era through the direct production of additional particles at high-energy accelerators, which have so far been unsuccessful. Examples include searches for supersymmetric particles, which connect bosons (integer-spin particles) with fermions (half-integer-spin particles), and for leptoquarks, which mix the fundamental quarks with leptons. Alternatively, indirect searches using precise measurements of well predicted standard-model observables allow highly targeted alternative tests for physics beyond the standard model because they can reach mass and energy scales beyond those directly accessible by today’s high-energy accelerators. Such an indirect search aims to determine the weak charge of the proton, which defines the strengthmore » of the proton’s interaction with other particles via the well known neutral electroweak force. Because parity symmetry (invariance under the spatial inversion (x, y, z)→(-x, -y, -z)) is violated only in the weak interaction, it provides a tool with which to isolate the weak interaction and thus to measure the proton’s weak charge. Here we discuss the value 0.0719±0.0045, where the uncertainty is one standard deviation, derived from our measured parity-violating asymmetry in the scattering of polarized electrons on protons, which is -226.5±9.3 parts per billion (the uncertainty is one standard deviation). Our value for the proton’s weak charge is in excellent agreement with the standard model and sets multi-teraelectronvolt-scale constraints on any semi-leptonic parity-violating physics not described within the standard model. Our results show that precision parity-violating measurements enable searches for physics beyond the standard model that can compete with direct searches at high-energy accelerators and, together with astronomical observations, can provide fertile approaches to probing higher mass scales.« less

Search WorldCat to find libraries that may hold this journal
Cited by: 26 works
Citation information provided by
Web of Science 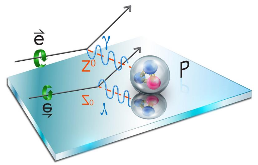 Figure 1: | Schematic showing the basic features of parity-violating electron scattering from the proton, with its three constituent quarks. The incoming electron with helicity +1 scatters away from the plane of the “PV mirror”. The image in the PV mirror shows the incoming electron with the opposite helicity −1,more » and instead of scattering into the plane of the PV mirror (as it would in a real mirror), it scatters out of the plane of the PV mirror. The dominant EM interaction, mediated by the photon (blue wave), conserves parity. The weak interaction, mediated by the neutral Z0 boson (dashed red line), violates parity. The weak interaction is studied experimentally by exploiting PV through reversals of the incident beam helicity, which mimic the PV mirror “reflection”.« less
All figures and tables (5 total)
Export Metadata
Save to My Library
You must Sign In or Create an Account in order to save documents to your library.

Weak charge of the proton and new physics
journal, July 2003

First Determination of the Weak Charge of the Proton
journal, October 2013

The Qweak experimental apparatus
journal, May 2015

Testing the Standard Model by Precision Measurement of the Weak Charges of Quarks
journal, September 2007

New Formulation of Box Corrections to the Weak Charge of the Proton
journal, August 2011

Model dependence of the dispersion correction to the parity-violating asymmetry in elastic scattering
journal, July 2011

Measurement of Parity Nonconservation and an Anapole Moment in Cesium
journal, March 1997

Strange Quark Magnetic Moment of the Nucleon at the Physical Point
journal, January 2017

Reassessment of the NuTeV determination of the weak mixing angle
journal, October 2010

Parity-Violating Electron Scattering and the Electric and Magnetic Strange Form Factors of the Nucleon
journal, November 2012

Measurement of Strange-Quark Contributions to the Nucleon's Form Factors at
journal, July 2004

Evidence for Strange-Quark Contributions to the Nucleon’s Form Factors at
journal, April 2005

Measurement of Strange Quark Contributions to the Vector Form Factors of the Proton at
journal, April 2009

Parity-Violating Electron Scattering from and the Strange Electric Form Factor of the Nucleon
journal, January 2006

Measurement of the parity violating asymmetry in the quasielastic electron-deuteron scattering and improved determination of the magnetic strange form factor and the isovector anapole radiative correction
journal, September 2016

Analyzing power in elastic scattering of electrons off a spin-0 target
journal, April 2008