The momentum-space dynamics of runaway electrons in a slab geometry, in terms of both the geometry and topological transition of the runaway vortex when synchrotron radiative damping is taking into account, have recently been shown to play a crucial role in runaway mitigation and avoidance. In a tokamak geometry, magnetic trapping arises from parallel motion along the magnetic field that scales as 1/R in strength with R the major radius. Since the transit time for a runaway electron moving along the field is of order 10-8 sec while the collisional time is of ~ 0.01 sec in ITER-like plasmas, a bounce-averaged formulation can drastically reduce computational cost. Here the LAPS-RFP code’s implementation of a bounce-averaged relativistic Fokker- Planck model, along with the essential physics of synchrotron radiation damping and knock-on collisions, is described. It is found that the magnetic trapping can reduce the volume of the runaway vortex as the momentum-space fluxes are strongly modified inside the trapped-region. As a result, the avalanche growth rate is reduced at off-axis locations. In addition to benchmarking with previous calculations that did not take into account radiation damping, we also clarify how synchrotron radiation damping modifies the avalanche growth rate in a tokamak. 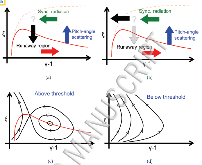 Magnetic energy flows during the current quench and termination of disruptions with runaway current plateau formation in JET and implications for ITER
journal, May 2011

Effects of particle trapping on the slowing-down of fast ions in a toroidal plasma
journal, July 1976

Theory for avalanche of runaway electrons in tokamaks
journal, October 1997

The effects of kinetic instabilities on the electron cyclotron emission from runaway electrons
journal, July 2018