In homogeneous drift-wave turbulence, zonal flows (ZFs) can be generated via a modulational instability (MI) that either saturates monotonically or leads to oscillations of the ZF energy at the nonlinear stage. This dynamics is often attributed as the predator–prey oscillations induced by ZF collisional damping; yet, similar dynamics is also observed in collisionless ZFs, in which case a different mechanism must be involved. Here, we propose a semi-analytic theory that explains the transition between the oscillations and saturation of collisionless ZFs within the quasilinear Hasegawa–Mima model. By analyzing phase-space trajectories of DW quanta (driftons) within the geometrical-optics (GO) approximation, we argue that the parameter that controls this transition is N ~ γ MI/ω DW, where γ MI is the MI growth rate and ω DW is the linear DW frequency. We argue that at N $$\ll$$ 1, ZFs oscillate due to the presence of so-called passing drifton trajectories, and we derive an approximate formula for the ZF amplitude as a function of time in this regime. We also show that at N ≳ 1, the passing trajectories vanish and ZFs saturate monotonically, which can be attributed to phase mixing of higher-order sidebands. A modification of N that accounts for effects beyond the GO limit is also proposed. These analytic results are tested against both quasilinear and fully-nonlinear simulations. They also explain the earlier numerical results by Connaughton et al (2010 J. Fluid Mech. 654 207) and Gallagher et al (2012 Phys. Plasmas 19 122115) and offer a different perspective on what the control parameter actually is that determines the transition from the oscillations to saturation of collisionless ZFs. 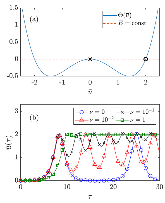 On the relation between secondary and modulational instabilities
journal, April 2007

Modulational instability of Rossby and drift waves and generation of zonal jets
journal, May 2010

The modulational instability in the extended Hasegawa-Mima equation with a finite Larmor radius
journal, December 2012

Rossby and drift wave turbulence and zonal flows: The Charney–Hasegawa–Mima model and its extensions
journal, December 2015

Zonal flow and streamer generation in drift turbulence
journal, May 2001

The nonlinear dynamics of the modulational instability of drift waves and the associated zonal flows
journal, December 2001

The oscillation between Rossby wave and zonal flow in a barotropic fluid
journal, September 1981

The stability of planetary waves on an infinite beta‐plane
journal, January 1974

On non-local energy transfer via zonal flow in the Dimits shift
journal, October 2017

Structure and Spacing of Jets in Barotropic Turbulence
journal, October 2007

S3T Stability of the Homogeneous State of Barotropic Beta-Plane Turbulence
journal, May 2015

Wave kinetics of drift-wave turbulence and zonal flows beyond the ray approximation
journal, May 2018

On the structure of the drifton phase space and its relation to the Rayleigh–Kuo criterion of the zonal-flow stability
journal, July 2018

On the stability of drift wave spectra with respect to zonal flow excitation
journal, May 2001

Spatio-temporal evolution of the L → I → H transition
journal, September 2012

Zonal Flows and Transient Dynamics of the Transition
journal, May 2003

Formation of solitary zonal structures via the modulational instability of drift waves
journal, May 2019

On the Rayleigh–Kuo criterion for the tertiary instability of zonal flows
journal, August 2018

On the tertiary instability formalism of zonal flows in magnetized plasmas
journal, May 2018

Other research related to this record: