Title: Analysis of the Hermite spectrum in plasma turbulence

The properties of the Hermite spectrum associated with the linear drift-kinetic equation—as used in studies of gyrokinetic turbulence—are examined. A rigorous uniform asymptotic expression is derived for the steady-state spectrum with a Lenard-Bernstein collision operator. It is found that the spectrum is partitioned into three regions whose boundaries are determined by the ratio of the collision frequency ν to the parallel transit frequency kvth. In the regime of small Hermite index, n, with n ≲ (ν/kv th) 2/3, collisions play no role, and the free energy decays like n –1/2 due to phase mixing. In the previously unexplored large-n regime, n ≥ (ν/kv th) 2, collisions are dominant, and the decay of the free energy spectrum is extremely steep, falling off like (n/e) –n. Most of the free energy is dissipated in the intermediate regime, (ν/kv th) 2/3 ≲ n << (ν/kv th) 2, where the asymptotic spectrum is in close agreement with the exponentially decaying “continuization” estimate. Furthermore, our analysis shows that collisions act as a singular perturbation, giving rise to the intermediate regime, where collisions are significantly altering the spectrum well inside the general large-n asymptotic region.

Search WorldCat to find libraries that may hold this journal
Cited by: 3 works
Citation information provided by
Web of Science 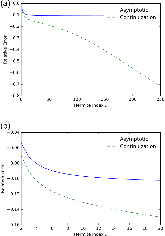 FIG. 1: Comparison of the relative error of the continuization approximation (28), and the uniform leading order asymptotic expansion (25). Both expressions were compared to a direct numerical solution with $\barν$ = 0.05, |G1| = 1, and G1000 = 0. The negative sign implies that the numerical solution is larger.
All figures and tables (1 total)
Export Metadata
Save to My Library
You must Sign In or Create an Account in order to save documents to your library.

On the kinetic theory of rarefied gases
journal, December 1949

LIII. Dynamical problems in illustration of the theory of gases
journal, November 1891

Fourier-Hermite Solutions of the Vlasov Equations in the Linearized Limit
journal, January 1967