Island formation and distributary channel branching are important processes in prograding river deltas. In this study, we develop and test a new theory predicting the distance to islands and channel bifurcations based on fluid mass conservation and radially symmetric transport conditions. We analyze channelization and island formation using nine new and five existing delta experiments as well as four field deltas. The new experiments were designed to produce islands from initial deposition of a mouth bar. Before island formation, each bar evolved into a radially symmetric deposit with unchannelized flow over its top previously described as a topographic flow expansion. This morphology was stable to topographic perturbations, and its distal limit prograded basinward while maintaining a characteristic flow depth. Island formation and channel branching occurred on top of this deposit. We hypothesize that this distance (Ψ) is set by the location where boundary shear stress applied by expanding, radially averaged flow falls below the threshold of sediment motion. The model predicts that the distance to the first island scales with water discharge, scales inversely with flow depth, and scales with the inverse square root of median grain diameter. Finally, from experiment to field scales, distances to island locations are predictedmore » within a factor of two.« less 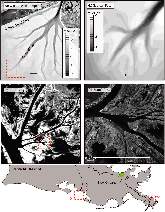 Figure 1: Map showing the locations of channel networks that radiate from a central node. The bar at the bottom of each map is 1 km long. Locations (b) and (d) are nested within the larger deltas and shown as red squares in (a) and (c), respectively. Maps (a) andmore » (c) are located within the greater Mississippi Delta in coastal Louisiana, USA (e). Topographic data in (a) and (b) are meters above Mean Lower Low Water (MLLW).« less
All figures and tables (11 total)
Export Metadata
Save to My Library
You must Sign In or Create an Account in order to save documents to your library.

A potential vorticity theory for the formation of elongate channels in river deltas and lakes
journal, January 2010

River Avulsions and Their Deposits
journal, May 2004

Splitting rivers at their seams: bifurcations and avulsion: BIFURCATIONS AND AVULSION
journal, June 2012

Bay-head deltas across the northern Gulf of Mexico back step in response to the 8.2ka cooling event
journal, December 2010

Anatomy of an avulsion
journal, February 1989

The significance of mid-channel bars in an active meandering river
journal, December 1986

Profiling risk and sustainability in coastal deltas of the world
journal, August 2015

On the incipient formation of bars and channels on alluvial fans
journal, June 2019

On the incipient formation of bars and channels on alluvial fans
journal, June 2019