Ab initio calculations of the magnon dispersion in ferromagnetic materials typically rely on the adiabatic local density approximation (ALDA) in which the effective exchange-correlation field is everywhere parallel to the magnetization. These calculations, however, tend to overestimate the “magnon stiffness”, defined as the curvature of the magnon frequency vs. wave vector relation evaluated at zero wave vector. Here we suggest a simple procedure to improve the magnon dispersion by taking into account gradient corrections to the ALDA at the exchange-only level. We find that this gradient correction always reduces the magnon stiffness. The surprisingly large size of these corrections (~30%) greatly improves the agreement between the calculated and the observed magnon stiffness for cobalt and nickel, which are known to be overestimated within the ALDA.

Search WorldCat to find libraries that may hold this journal
Cited by: 3 works
Citation information provided by
Web of Science 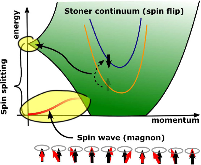 Fig. 1: Sketch of a typical transverse magnetic absorption spectrum based on a spin-polarized uniform electron gas (density of states of magnetic excitations). The Stoner continuum is shown as the green-shaded area and the dispersion relation of the magnons is highlighted as the red curve outside the Stoner continuum. Formore » a ferromagnetic material – in the absence of spin-orbit coupling – the dispersion relation starts from zero energy at zero momentum, which reflects the fact that a global rotation of the spins does not change the energy of the ferromagnet (Goldstone mode).« less
All figures and tables (5 total)
Export Metadata
Save to My Library
You must Sign In or Create an Account in order to save documents to your library.

First-Principles Approach to Noncollinear Magnetism: Towards Spin Dynamics
journal, May 2007

The spin wave excitations and the temperature dependence of the magnetization in iron, cobalt, nickel and their alloys
journal, October 1986

Measurement of the Magnon Dispersion Relation of Iron
journal, July 1965

Energies and Lifetimes of Magnons in Complex Ferromagnets: A First-Principle Study of Heusler Alloys
journal, June 2009

Transverse and longitudinal gradients of the spin magnetization in spin-density-functional theory
journal, December 2013