Recent years have seen a surprising connection between the physics of scattering amplitudes and a class of mathematical objects — the positive Grassmannian, positive loop Grassmannians, tree and loop Amplituhedra — which have been loosely referred to as “positive geometries”. The connection between the geometry and physics is provided by a unique differential form canonically determined by the property of having logarithmic singularities (only) on all the boundaries of the space, with residues on each boundary given by the canonical form on that boundary. The structures seen in the physical setting of the Amplituhedron are both rigid and rich enough to motivate an investigation of the notions of “positive geometries” and their associated “canonical forms” as objects of study in their own right, in a more general mathematical setting. In this paper we take the first steps in this direction. We begin by giving a precise definition of positive geometries and canonical forms, and introduce two general methods for finding forms for more complicated positive geometries from simpler ones — via “triangulation” on the one hand, and “push-forward” maps between geometries on the other. We present numerous examples of positive geometries in projective spaces, Grassmannians, and toric, cluster and flagmore » varieties, both for the simplest “simplex-like” geometries and the richer “polytope-like” ones. We also illustrate a number of strategies for computing canonical forms for large classes of positive geometries, ranging from a direct determination exploiting knowledge of zeros and poles, to the use of the general triangulation and push-forward methods, to the representation of the form as volume integrals over dual geometries and contour integrals over auxiliary spaces. These methods yield interesting representations for the canonical forms of wide classes of positive geometries, ranging from the simplest Amplituhedra to new expressions for the volume of arbitrary convex polytopes.« less

Search WorldCat to find libraries that may hold this journal
Cited by: 32 works
Citation information provided by
Web of Science 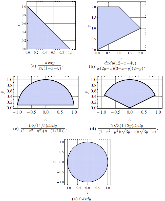 Figure 1: Canonical forms of (a) a triangle, (b) a quadrilateral, (c) a segment of the unit disk with $y$ ≥ 1/10, (d) a sector of the unit disk with central angle 2$π$/3 symmetric about the $y$-axis, and (e) the unit disk. The form is identically zero for the unitmore » disk because there are no zero-dimensional boundaries. For each of the other figures, the form has simple poles along each boundary component, all leading residues are ±1 at zero-dimensional boundaries and zero elsewhere, and the form is positively oriented on the interior.« less
All figures and tables (12 total)
Export Metadata
Save to My Library
You must Sign In or Create an Account in order to save documents to your library.

The amplituhedron and the one-loop Grassmannian measure
journal, January 2016

New recursion relations for tree amplitudes of gluons
journal, May 2005

Resolution of Singularities of an Algebraic Variety Over a Field of Characteristic Zero: I
journal, January 1964

A note on polytopes for scattering amplitudes
journal, April 2012

Towards the amplituhedron volume
journal, March 2016

A duality for the S matrix
journal, March 2010

An Algebraic Cell Decomposition of the Nonnegative Part of a Flag Variety
journal, March 1999

Into the amplituhedron
journal, December 2014

Variations on a theorem of Abel
journal, December 1976

The volume of duals and sections of polytopes
journal, June 1992

Properties of scattering forms and their relation to associahedra
journal, March 2018

Moduli space of paired punctures, cyclohedra and particle pairs on a circle
journal, May 2019

String Amplitudes from Field-Theory Amplitudes and Vice Versa
journal, May 2019

Scattering forms and the positive geometry of kinematics, color and the worldsheet
journal, May 2018