Title: Scattering forms and the positive geometry of kinematics, color and the worldsheet

The search for a theory of the S-Matrix over the past five decades has revealed surprising geometric structures underlying scattering amplitudes ranging from the string worldsheet to the amplituhedron, but these are all geometries in auxiliary spaces as opposed to the kinematical space where amplitudes actually live. Motivated by recent advances providing a reformulation of the amplituhedron and planar N = 4 SYM amplitudes directly in kinematic space, we propose a novel geometric understanding of amplitudes in more general theories. The key idea is to think of amplitudes not as functions, but rather as differential forms on kinematic space. We explore the resulting picture for a wide range of massless theories in general spacetime dimensions. For the bi-adjoint Φ3 scalar theory, we establish a direct connection between its “scattering form” and a classic polytope — the associahedron — known to mathematicians since the 1960’s. We find an associahedron living naturally in kinematic space, and the tree level amplitude is simply the “canonical form” associated with this “positive geometry”. Fundamental physical properties such as locality and unitarity, as well as novel “soft” limits, are fully determined by the combinatorial geometry of this polytope. Furthermore, the moduli space for the open stringmore » worldsheet has also long been recognized as an associahedron. We show that the scattering equations act as a diffeomorphism between the interior of this old “worldsheet associahedron” and the new “kinematic associahedron”, providing a geometric interpretation and simple conceptual derivation of the bi-adjoint CHY formula. We also find “scattering forms” on kinematic space for Yang-Mills theory and the Non-linear Sigma Model, which are dual to the fully color-dressed amplitudes despite having no explicit color factors. This is possible due to a remarkable fact—“Color is Kinematics”— whereby kinematic wedge products in the scattering forms satisfy the same Jacobi relations as color factors. Finally, all our scattering forms are well-defined on the projectivized kinematic space, a property which can be seen to provide a geometric origin for color-kinematics duality.« less

Search WorldCat to find libraries that may hold this journal
Cited by: 36 works
Citation information provided by
Web of Science 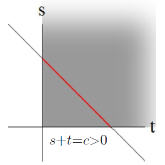 Figure 1: The one-dimensional associahedron (red line segment) as the intersection of the positive region and the subspace s+ $t$ = $c$ where $c$ > 0 is a constant.
All figures and tables (25 total)
Export Metadata
Save to My Library
You must Sign In or Create an Account in order to save documents to your library.

Ambitwistor strings and the scattering equations at one loop
journal, April 2014

Scattering equations and matrices: from Einstein to Yang-Mills, DBI and NLSM
journal, July 2015

Properties of scattering forms and their relation to associahedra
journal, March 2018

On the null origin of the ambitwistor string
journal, November 2016

A relation between tree amplitudes of closed and open strings
journal, May 1986

New BCJ representations for one-loop amplitudes in gauge theories and gravity
journal, May 2018

A duality for the S matrix
journal, March 2010

A current algebra for some gauge theory amplitudes
journal, November 1988

The irreducibility of the space of curves of given genus
journal, January 1969

UV considerations on scattering amplitudes in a web of theories
journal, December 2019

On the kinematic algebra for BCJ numerators beyond the MHV sector
journal, November 2019

Moduli space of paired punctures, cyclohedra and particle pairs on a circle
journal, May 2019

String Amplitudes from Field-Theory Amplitudes and Vice Versa
journal, May 2019