Title: Characterizing physical, chemical, and magnetic properties at the nanoscale

Synchrotron light sources are extremely useful for the characterization of materials in many different research fields (including physics, chemistry, materials science, biology, medicine, geology, and cultural heritage). The evolution of technology, however, currently points toward the miniaturization of devices and molecular motors, as well as the creation (through atomic manipulation) of new materials. This brings an acute necessity for direct chemical imaging of materials, i.e., with the use of x-ray microscopy at the nanometer and atomic length scales.1, 2 Although a variety of new x-ray nanoprobes and x-ray microscopy techniques have been developed in recent years, the spatial resolution of direct chemical or magnetic contrast imaging techniques remains on the order of several nanometers. Invented in the 1980s, scanning tunneling microscopy (STM) allows a large range of materials to be viewed at the atomic level.3 STM also offers a finer degree of spatial resolution than almost any other image technique, but it is chemically ‘blind’ and thus cannot be used alone to directly identify chemical elements on a surface. For many years, researchers have attempted to solve this problem by combining STM with synchrotron x-ray excitations,4–7 and a new technique—known as synchrotron xray scanning tunneling microscopy (SX-STM)—has emerged. In thismore » technique—which combines the chemical sensitivity of xrays with the high spatial resolution of STM—a monochromatic x-ray beam is used to illuminate a tip-sample junction, while the tip makes raster scans across the sample surface. A feedback system maintains a tip–sample separation that is typically less than 1nm. The goal is tomodulate the tunneling current through x-ray excitation and therewith obtain electronic and chemical contrast. It is difficult, however, to achieve real chemical contrast because of three serious issues. First, electrons excited by x-rays do not just tunnel into the tip, but can also be ejected from the sample and hit the sidewalls of the tip detector (which degrades the spatial resolution). Second, because photoejected electrons still provide a deceptive current signal in the far field, the STM feedback system can lift the tip out of the tunneling regime without being noticed. Last, themeasured tip current is always a convolution of the conventional tunnel current (which is related to the sample topography) and the x-ray-excited electrons (which carry the material’s chemical information).« less 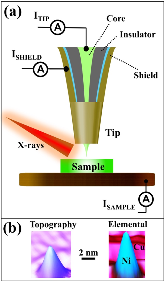 Figure 1: (a) In SX-STM, a smart tip is utilized as the detector, while the tip-sample junction is illuminated by monochromatic synchrotron X-rays. The smart tip consists of a metallic core that is tunneling over the sample surface, an insulating film to reduce photoelectron background and a conductive shield tomore » prevent charging of the tip. The X-ray induced currents are simultaneously measured at the tip, ITIP, the shield, ISHIELD, and the sample, ISAMPLE and provide chemical contrast. (b) Topography and elemental contrast are simultaneously obtained from a nanoscale Ni cluster on Cu.« less
All figures and tables (1 total)
Export Metadata
Save to My Library
You must Sign In or Create an Account in order to save documents to your library.