Assessing fish species richness at the scale of an entire watershed or multiple watersheds is important when designing conservation areas and maintaining aquatic biodiversity. Estimating biodiversity at this scale requires considering the effects of habitat heterogeneity within and across drainages on the species-area relationship (SAR). I examined the SAR using unusually complete data to assess fish species richness in minimally disturbed watersheds on large public lands in the Sand Hills ecoregion, southeastern United States of America (USA). My objectives were to compare (1) true richness with estimates produced by different species richness estimators and sampling designs and (2) species richness among reservations. Accurate estimates were obtained for five contiguous watersheds (780 km2 total) by using Chao 2 or first-order jackknife estimators, coupled with (1) a stratified design that apportioned sampling effort over 25 sample sites based on major spatial correlates of assemblage composition, including stream size and drainage basin identity and (2) sufficient sampling effort to collect enough individuals to include rare species. The greatest species richness was in streams within a large land holding characterized by greater instream habitat diversity, less disturbed land coverage, more forested land, and closer proximity to source pools than other reservations. Species richness inmore » these streams was within the range observed in high diversity Neotropical and Indomalayan realms.« less 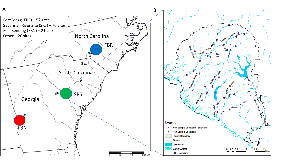 Figure 1: Electrofishing sample sites in the Sand Hills ecoregion (A) including sample sites located on the Savannah River Site (B). “Selected” sites in (B) are used in the stratified design described in the text. Site in the center of the reservoir in (B) in was sampled before the reservoirmore » was constructed.« less
All figures and tables (12 total)
Export Metadata
Save to My Library
You must Sign In or Create an Account in order to save documents to your library.

Quantifying biodiversity: procedures and pitfalls in the measurement and comparison of species richness
journal, July 2001

A critique of the use of jackknife and related non-parametric techniques to estimate species richness
journal, November 2004

Estimating number of species and relative abundances in stream-fish communities: effects of sampling effort and discontinuous spatial distributions
journal, May 1995

Estimating species richness and catch per unit effort from boat electro-fishing in a lowland river in temperate Australia
journal, November 2008

Stream biodiversity: The ghost of land use past
journal, December 1998

Influence of Stream Location in a Drainage Network on the Index of Biotic Integrity
journal, September 1992

Impact of Curve Construction and Community Dynamics on the Species–Time Relationship
journal, September 2007

A Comparison of Fish Community Composition of Headwater and Adventitious Streams in a Coldwater River System
journal, June 2006

Spatio-temporal scaling of biodiversity and the species-time relationship in a stream fish assemblage
journal, June 2010

The Statistics and Biology of the Species-Area Relationship
journal, June 1979

Distribution of fish in the Virgin River, a tributary of the lower Colorado River
journal, January 1985

Estimating the Number of Classes via Sample Coverage
journal, March 1992

Species richness estimators: how many species can dance on the head of a pin?
journal, March 2005

Statistics and Partitioning of Species Diversity, and Similarity among Multiple Communities
journal, May 1996

Metacommunity theory as a multispecies, multiscale framework for studying the influence of river network structure on riverine communities and ecosystems
journal, March 2011