Title: The Sec and Tat Protein Translocation Pathways in Chloroplasts

Most chloroplast proteins are encoded by nuclear genes, translated in the cytosol as precursor proteins, and posttranslationally imported into the chloroplast. A subset of imported proteins is further localized to the thylakoid membrane and lumen by mechanisms conserved from the cyanobacterial endosymbiont that evolved into the chloroplast. The Sec and Twin arginine translocation (Tat) pathways are the major systems for transporting proteins across the thylakoid membrane into the lumen. Both systems employ hydrophobic cleavable signal peptides for targeting, but Tat signal peptides also contain an essential twin arginine motif. Biochemical studies indicate that the thylakoid Sec system operates similarly to the Escherichia coli Sec system, that is a chloroplast SecA powers transport of unfolded protein substrates through a fixed cpSecYE channel. Indirect evidence also suggests that the thylakoid Sec system can integrate plastid-encoded multispanning membrane proteins cotranslationally. The Tat pathway is a newly discovered translocation system that can transport folded protein domains using the ΔμH+ as the sole energy source. Three membrane proteins, High chlorophyll fluorescence 106 (Hcf106), Thylakoid assembly 4 (Tha4), and cpTatC constitute the components of the Tat machinery. Precursor proteins bind to a large cpTatC-Hcf106 complex by contact of the signal peptide twin arginine region to cpTatCmore » and its hydrophobic core to Hcf106. This triggers recruitment of a Tha4 oligomer, setting the stage for transport. During the translocation step, the Tha4 oligomer undergoes a conformation shift that aligns its amphipathic helices and carboxyl tails, possibly in association with the bilayer interface. Furthermore, these results have been interpreted in a general model in which the Tha4 oligomer facilitates passage of the substrate across the lipid bilayer.« less

Search WorldCat to find libraries that may hold this journal
Cited by: 30 works
Citation information provided by
Web of Science 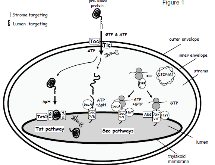 Figure 1: Model for Sec and Tat protein transport pathways in chloroplasts. Nuclear encoded thylakoid lumenal proteins contain bipartite targeting signals. A stromal-targeting transit peptide directs import into the stroma by the Toc and Tic import complexes in the envelope. Cleavage of the transit peptide exposes signal peptides that specificallymore » target one subgoup of precursors to the Tat pathway, which transports proteins in folded conformation, and another subgroup to the cpSecA-cpSecYE pathway, which transports proteins in unfolded conformation. Some chloroplast-encoded thylakoid proteins appear to be integrated by ribosomeor ribosome-cpSecA coupled to the cpSecYE channel (see text).« less
All figures and tables (4 total)
Export Metadata
Save to My Library
You must Sign In or Create an Account in order to save documents to your library.

Central Functions of the Lumenal and Peripheral Thylakoid Proteome of Arabidopsis Determined by Experimentation and Genome-Wide Prediction
journal, January 2002

The chloroplast genome
journal, May 1992

Mechanisms of Protein Import and Routing in Chloroplasts
journal, December 2004

Early events in the import/assembly pathway of an integral thylakoid protein
journal, November 1990

Multiple pathways for protein transport into or across the thylakoid membrane.
journal, November 1993

The Rieske Fe/S Protein of the Cytochromeb /f Complex in Chloroplasts
journal, November 2001

Post-translational protein translocation into thylakoids by the Sec and ΔpH-dependent pathways
journal, December 2001

Precursors Bind to Specific Sites on Thylakoid Membranes prior to Transport on the Delta pH Protein Translocation System
journal, March 2000

Protein transport via the cpTat pathway displays cooperativity and is stimulated by transport-incompetent substrate
journal, March 2003

Pathway specificity for a ΔpH-dependent precursor thylakoid lumen protein is governed by a 'Sec-avoidance' motif in the transfer peptide and a 'Sec-incompatible' mature protein
journal, July 1997

SecB, one small chaperone in the complex milieu of the cell
journal, October 2002

The Sec-independent Twin-arginine Translocation System Can Transport Both Tightly Folded and Malfolded Proteins across the Thylakoid Membrane
journal, December 1998

In Vitro Reconstitution of Insertion and Processing of Cytochrome f in a Homologous Chloroplast Translation System
journal, September 2001

A SecY Homologue Is Required for the Elaboration of the Chloroplast Thylakoid Membrane and for Normal Chloroplast Gene Expression
journal, April 1998

Protein translocation into and within cyanelles (Review)
journal, January 2005

Co-translocation of a Periplasmic Enzyme Complex by a Hitchhiker Mechanism through the Bacterial Tat Pathway
journal, May 1999

Folding quality control in the export of proteins by the bacterial twin-arginine translocation pathway
journal, April 2003

A folded protein can be transported across the chloroplast envelope and thylakoid membranes.
journal, May 1997

Analysis of the Import of Carboxyl-Terminal Truncations of the 23-Kilodalton Subunit of the Oxygen-Evolving Complex Suggests That Its Structure Is an Important Determinant for Thylakoid Transport
journal, August 1996

The Thylakoid ΔpH/ΔΨ Are Not Required for the Initial Stages of Tat-dependent Protein Transport in Tobacco Protoplasts
journal, October 2005

A Novel and Ubiquitous System for Membrane Targeting and Secretion of Cofactor-Containing Proteins
journal, April 1998

An Essential Component of a Novel Bacterial Protein Export System with Homologues in Plastids and Mitochondria
journal, July 1998

The Maize tha4 Gene Functions in Sec-Independent Protein Transport in Chloroplasts and Is Related to hcf106 , tatA , and tatB
journal, October 1999

An essential role of a TatC homologue of a  pH- dependent protein transporter in thylakoid membrane formation during chloroplast development in Arabidopsis thaliana
journal, August 2001

TatB and TatC Form a Functional and Structural Unit of the Twin-arginine Translocase from Escherichia coli
journal, March 2001

Differential Interactions between a Twin-Arginine Signal Peptide and Its Translocase in Escherichia coli
journal, October 2003

Evidence for a loop mechanism of protein transport by the thylakoid Delta pH pathway
journal, February 1998

Two distinct translocation intermediates can be distinguished during protein transport by the TAT (Δph) pathway across the thylakoid membrane
journal, October 1999

How to get a folded protein across a membrane
journal, November 1999

The Tat pathway in bacteria and chloroplasts (Review)
journal, January 2005

Requirement for phospholipids of the translocation of the trimethylamine N -oxide reductase through the Tat pathway in Escherichia coli
journal, December 1999