Title: Onset of natural selection in populations of autocatalytic heteropolymers

We present that reduction of information entropy along with ever-increasing complexity is among the key signatures of life. Understanding the onset of such behavior in the early prebiotic world is essential for solving the problem of the origin of life. Here we study a general problem of heteropolymers capable of template-assisted ligation based on Watson-Crick-like hybridization. The system is driven off-equilibrium by cyclic changes in the environment. We model the dynamics of 2-mers, i.e., sequential pairs of specific monomers within the heteropolymer population. While the possible number of them is Z2 (where Z is the number of monomer types), we observe that most of the 2-mers get extinct, leaving no more than 2Z survivors. This leads to a dramatic reduction of the information entropy in the sequence space. Our numerical results are supported by a general mathematical analysis of the competition of growing polymers for constituent monomers. This natural-selection-like process ultimately results in a limited subset of polymer sequences. Importantly, the set of surviving sequences depends on initial concentrations of monomers and remains exponentially large (2L down from ZL for length L) in each of realizations. Therefore, an inhomogeneity in initial conditions allows for a massively parallel search of themore » sequence space for biologically functional polymers, such as ribozymes. We also propose potential experimental implementations of our model in the contexts of either biopolymers or artificial nano-structures.« less 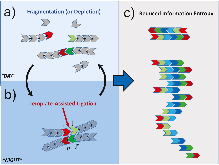 FIG. 1: A conceptual illustration of our model. The population of heteropolymers is cycled between day, a), and night, b), phases. During the night phase polymer chains undergo template-assisted ligation, joining left and right ends i and j respectively to form a new 2-mer $ij$. This process is assisted bymore » a complementary 2-mer $j^∗i^∗$. The process results in a reduced information entropy of chain sequences, that ends up being dominated by a small subset of 2-mers as illustrated in c).« less
All figures and tables (5 total)
Export Metadata
Save to My Library
You must Sign In or Create an Account in order to save documents to your library.

The Origins of the RNA World
journal, April 2010

Required Levels of Catalysis for Emergence of Autocatalytic Sets in Models of Chemical Reaction Systems
journal, May 2011

Prebiotic Chemistry and the Origin of the RNA World
journal, January 2004

The Role of Templating in the Emergence of RNA from the Prebiotic Chemical Mixture
journal, October 2017

Kinetics of RNA Degradation by Specific Base Catalysis of Transesterification Involving the 2‘-Hydroxyl Group
journal, June 1999

Suggested model for prebiotic evolution: the use of chaos.
journal, June 1983

Chemical Evolution and the Evolutionary Definition of Life
journal, June 2017

Escalation of polymerization in a thermal gradient
journal, April 2013