Jefferson Lab’s upgrade of its Continuous Electron Beam Accelerator Facility (CEBAF) has recently been completed. The project involved an upgrade of the accelerator to achieve a maximum beam energy of 12 GeV and the construction of a fourth end station, Experimental Hall D, as well as new detector equipment for two of the three existing halls (A, B, and C). A broad experimental program has been developed to map the nucleon’s intrinsic quark distributions in transverse space and in longitudinal momentum through measurements of deeply exclusive and semi-inclusive processes, and to probe color confinement by studying the spectrum of hadrons with active gluon degrees of freedom in the wave function. Other programs include the forward parton distribution function at large quark momentum fraction χ, the quark and gluon polarized distribution functions, measurements of electromagnetic form factors of the nucleon ground state and of nucleon resonance transitions at short distances, and the exploration of physics beyond the Standard Model in high-precision parity-violating processes and in the search for signals of dark matter. The higher beam energy is also suitable for exploration of quark hadronization properties using the nucleus as a laboratory. This review highlights major areas of hadron and nuclear sciencemore » that will be the focus of the first 5 years of operation.« less

Search WorldCat to find libraries that may hold this journal
Cited by: 6 works
Citation information provided by
Web of Science 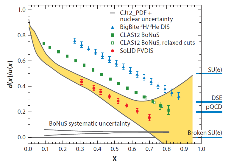 Figure 1: Projections for the ratio d(x)/u(x) from the Marathon experiment (solid triangles), the CLAS BoNuS12 experiment (solid squares), and the SoLID parity-violation experiment (red circles). The BoNuS12 systematic errors are indicated by the solid lines at the bottom. The yellow shaded area indicates the uncertainties from previous measurements. Themore » labels on the right indicate possible limits for x → 1 projected from different models. Abbreviations: DIS, deep-inelastic scattering; DSE, Dyson–Schwinger equation; PDF, parton distribution function; PVDIS, parity-violating DIS. Adapted from the 2015 NSAC Long Range Plan.« less
All figures and tables (9 total)
Export Metadata
Save to My Library
You must Sign In or Create an Account in order to save documents to your library.

Spectrum and structure of octet and decuplet baryons and their positive-parity excitations
journal, September 2019

Colloquium : Roper resonance: Toward a solution to the fifty year puzzle
journal, March 2019