Solvate ionic liquids (SILs) are a promising electrolyte for Li-ion batteries; thus, their behavior at electrified interfaces is crucial for the operation of these batteries. We report molecular dynamics simulation results for a prototypical SIL of lithium triglyme bis(trifluoro-methanesulfonyl)imide ([Li(G3)][TFSI]) sandwiched between electrified surfaces. At negatively charged as well as neutral electrodes, the electrolyte largely maintains the characteristics of SILs, e.g., a majority of the interfacial Li+ ions remains coordinated by the similar number of oxygen atoms on G3 ligands as the bulk Li+ ions. The persistence of the complex ions is attributed to the 1:1 Li-G3 ratio in bulk SILs and the fact that G3 molecules readily adapt to the interfacial environment, e.g., by aligning themselves with the surface to ensure good solvation of the interfacial Li+ ions. Nevertheless, the interfacial Li+ ions also display changes of solvation from that in bulk SIL by deviating from the molecular plane formed by the oxygen atoms on G3 ligands as electrodes become more negatively charged. Using density functional theory along with natural bond orbital calculations, we examine the effects of such structural distortion on the properties of the complex cation. Both the frontier orbital energies of the complex cation and themore » donor-acceptor interactions between Li+ ions and G3 ligands are found to be dependent on the deviation of Li+ ions from the molecular plane of the G3 ligands, which suggest that the reduction of Li+ ions should be facilitated by the structural distortion. These results bear important implications for the nanostructures and properties of SILs near electrified interfaces during actual operations of Li-ion batteries and serve to provide guidance toward the rational design of new SILs electrolytes.« less 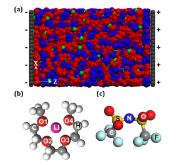 Figure 1: (a) A schematic of the simulation system composing of a slab of (b) [Li(G3)]+ complex cations and (c) [TFSI]- anions sandwiched between two charged electrodes. In (a), the blue, red, green, and gray spheres denote TFSI-ion, G3 molecule, Li+ ion, and electrode atoms, respectively. In (b-c), the magenta,more » red, gray, white, blue, yellow, and cyan spheres denote the lithium ion, oxygen, carbon, hydrogen, nitrogen, sulfur, and fluorine atoms, respectively. The simulation system, cations, and anions were visualized using the visual molecular dynamics (VMD) package.« less
All figures and tables (8 total)
Export Metadata
Save to My Library
You must Sign In or Create an Account in order to save documents to your library.

Development and Testing of the OPLS All-Atom Force Field on Conformational Energetics and Properties of Organic Liquids
journal, January 1996

Computational and Experimental Study of Li-Doped Ionic Liquids at Electrified Interfaces
journal, May 2016

A Second Generation Force Field for the Simulation of Proteins, Nucleic Acids, and Organic Molecules
journal, May 1995

Development of the Colle-Salvetti correlation-energy formula into a functional of the electron density
journal, January 1988