Title: The pressure distribution inside the proton

Here, the proton, one of the components of atomic nuclei, is composed of fundamental particles called quarks and gluons. Gluons are the carriers of the force that binds quarks together, and free quarks are never found in isolation—that is, they are confined within the composite particles in which they reside. The origin of quark confinement is one of the most important questions in modern particle and nuclear physics because confinement is at the core of what makes the proton a stable particle and thus provides stability to the Universe. The internal quark structure of the proton is revealed by deeply virtual Compton scattering, a process in which electrons are scattered off quarks inside the protons, which subsequently emit high-energy photons, which are detected in coincidence with the scattered electrons and recoil protons. Here we report a measurement of the pressure distribution experienced by the quarks in the proton. We find a strong repulsive pressure near the centre of the proton (up to 0.6 femtometres) and a binding pressure at greater distances. The average peak pressure near the centre is about 1035 pascals, which exceeds the pressure estimated for the most densely packed known objects in the Universe, neutron stars. Thismore » work opens up a new area of research on the fundamental gravitational properties of protons, neutrons and nuclei, which can provide access to their physical radii, the internal shear forces acting on the quarks and their pressure distributions.« less

Search WorldCat to find libraries that may hold this journal
Cited by: 42 works
Citation information provided by
Web of Science 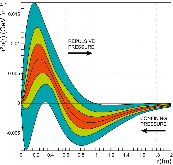 FIG. 1: The radial pressure distribution in the proton. The graph shows the pressure distribution r2p(r) resulting from the interactions of the quarks in the proton versus the radial distance from the center in femtometer. The black central line corresponds to the pressure extracted from the D-term parameters fitted tomore » the published data at 6 GeV [10, 11]. The corresponding estimated uncertainties are displayed as the shaded area shown in light green. They correspond to 1 standard deviation. See text for more details.« less
All figures and tables (7 total)
Export Metadata
Save to My Library
You must Sign In or Create an Account in order to save documents to your library.

Deeply virtual Compton scattering at small and the access to the GPD H
journal, December 2010

term and the structure of pointlike and composed spin-0 particles
journal, December 2017

Masses, Radii, and the Equation of State of Neutron Stars
journal, September 2016

In-medium modified energy-momentum tensor form factors of the nucleon within the framework of a - - soliton model
journal, June 2014

Deeply virtual Compton scattering on the nucleon: Study of the twist-3 effects
journal, May 2001

Nucleon form factors of the energy-momentum tensor in the chiral quark-soliton model
journal, May 2007

Skewed and double distributions in the pion and the nucleon
journal, November 1999

Cross Sections for the Exclusive Photon Electroproduction on the Proton and Generalized Parton Distributions
journal, November 2015

Cross sections for the exclusive photon electroproduction on the proton and Generalized Parton Distributions
text, January 2015

Measurability of pressure inside the proton
journal, June 2019

A study of stress-tensor distribution around the flux tube in the Abelian–Higgs model
journal, September 2019

Near threshold and photoproduction at JLab and RHIC
journal, July 2019

Energy momentum tensor and the term in the bag model
journal, February 2020

Pressure Distribution and Shear Forces inside the Proton
journal, February 2019

Revisiting the mechanical properties of the nucleon
journal, January 2019

Forces inside hadrons: pressure, surface tension, mechanical radius, and all that
text, January 2018

The pressure distribution and shear forces inside the proton
text, January 2018

Revisiting the mechanical properties of the nucleon
text, January 2018

Energy momentum tensor and the D-term in the bag model
text, January 2019