In plasmas, distribution functions often demonstrate long anisotropic tails or otherwise significant deviations from local Maxwellians. The tails, especially if they are pulled out from the bulk, pose a serious challenge for numerical simulations as resolving both the bulk and the tail on the same mesh is often challenging. A multi-scale approach, providing evolution equations for the bulk and the tail individually, could offer a resolution in the sense that both populations could be treated on separate meshes or different reduction techniques applied to the bulk and the tail population. In this paper, we propose a multi-scale method which allows us to split a distribution function into a bulk and a tail so that both populations remain genuine, non-negative distribution functions and may carry density, momentum, and energy. The proposed method is based on the observation that the motion of an individual test particle in a plasma obeys a stochastic differential equation, also referred to as a Langevin equation. Finally, this allows us to define transition probabilities between the bulk and the tail and to provide evolution equations for both populations separately. 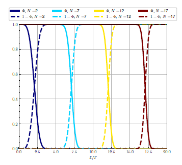 FIG. 1: The transition probability and its complement as a function of energy normalized to the temperature for M = 10 and different N. Notice the steepening of Φ with increasing N which reflects that the particles become less collisional at higher energies.
All figures and tables (1 total)
Export Metadata
Save to My Library
You must Sign In or Create an Account in order to save documents to your library.

On the kinetic theory of rarefied gases
journal, December 1949

On the simulation of iterated Itô integrals
journal, January 2001