Fractures form the main pathways for flow in the subsurface within low-permeability rock. For this reason, accurately predicting flow and transport in fractured systems is vital for improving the performance of subsurface applications. Fracture sizes in these systems can range from millimeters to kilometers. Although modeling flow and transport using the discrete fracture network (DFN) approach is known to be more accurate due to incorporation of the detailed fracture network structure over continuum-based methods, capturing the flow and transport in such a wide range of scales is still computationally intractable. Furthermore, if one has to quantify uncertainty, hundreds of realizations of these DFN models have to be run. To reduce the computational burden, we solve flow and transport on a graph representation of a DFN. We study the accuracy of the graph approach by comparing breakthrough times and tracer particle statistical data between the graph-based and the high-fidelity DFN approaches, for fracture networks with varying number of fractures and degree of heterogeneity. Due to our recent developments in capabilities to perform DFN high-fidelity simulations on fracture networks with large number of fractures, we are in a unique position to perform such a comparison. We show that the graph approach showsmore » a consistent bias with up to an order of magnitude slower breakthrough when compared to the DFN approach. We show that this is due to graph algorithm's underprediction of the pressure gradients across intersections on a given fracture, leading to slower tracer particle speeds between intersections and longer travel times. We present a bias correction methodology to the graph algorithm that reduces the discrepancy between the DFN and graph predictions. We show that with this bias correction, the graph algorithm predictions significantly improve and the results are very accurate. In conclusion, the good accuracy and the low computational cost, with O(104) times lower times than the DFN, makes the graph algorithm an ideal technique to incorporate in uncertainty quantification methods.« less

Search WorldCat to find libraries that may hold this journal
Cited by: 8 works
Citation information provided by
Web of Science 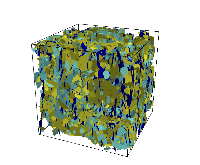 Figure-1: Discrete fracture network made up of 6330 circular fracture whose radii are sampled from three independent truncated power-law distributions. Fractures are colored by family. There are about 13 million grid cells in this model.
All figures and tables (12 total)
Export Metadata
Save to My Library
You must Sign In or Create an Account in order to save documents to your library.