We present that perovskite catalysts have been extensively studied for reduction–oxidation (redox) reactions; however, their acid–base catalytic properties are still under-explored. This review collects work aiming to study the acid–base catalytic properties of perovskites. Reports regarding combined acid–base/redox catalysis over perovskites lie beyond the scope of the present review. For the characterization of acid–base properties, researchers have studied the interaction of probe molecules with perovskite surfaces by means of multiple techniques that provide information about the density, strength and type of adsorption sites. The top-surface composition of perovskites, which relates to the abundance of the acid–base sites, has been studied by means of low energy ion scattering (LEIS), and, the less surface sensitive, conventional X-ray photoelectron spectroscopy (XPS). Probe reactions, with the conversion of 2-propanol as the common choice, have also been employed for characterizing the acid–base catalytic properties of perovskites. The complex nature of perovskite surfaces, which explains the still absent fundamental relations between the structure of the catalyst and reaction rates/selectivity, encounters a great challenge due to the surface reconstruction of these materials. In this review, we devote a special section to highlight recent publications that report the impact of surface reconstruction and particle shape on acid–base catalysismore » over perovskites. In addition, we review promising catalytic performances of perovskite catalysts for other reactions of interest. Challenges in acid–base catalysis over perovskites focus on the development of time-resolved monolayer-sensitive characterization of surfaces under operando conditions and the discernment of combined acid–base/redox reaction mechanisms. Finally, opportunities lay on tuning the acid–base characteristics of perovskites with computation-based catalytic descriptors to achieve desired selectivities and enhanced rates.« less

Search WorldCat to find libraries that may hold this journal
Cited by: 7 works
Citation information provided by
Web of Science 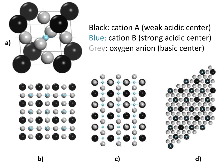 Acid–Base Reactivity of Perovskite Catalysts Probed via Conversion of 2-Propanol over Titanates and Zirconates
journal, June 2017

Effect of synthesis method of LSCF perovskite on its catalytic properties for phenol methylation
journal, August 2010

Surface acidity and basicity of γ-Al2O3 doped with K+ and La3+ and calcined at elevated temperatures
journal, February 2003

Synthesis-Dependent Surface Acidity and Structure of SrTiO 3 Nanoparticles
journal, May 2010

Cubic Perovskite ZnTiO 3 Nanopowder as a Recyclable Heterogeneous Catalyst for the Synthesis of 1,6-Naphthyridines in Water
journal, January 2015

Preparation and characterisation of SrTi1−x−yZrxMnyO3 solid solution powders in relation to their use in combustion catalysis
journal, July 1997

Catalytic activity and selectivity of perovskites La1−xSrxV1−x3+Vx4+O3 for the transformation of isopropanol
journal, October 1995

Insight into the Selectivity of Isopropanol Conversion at Strontium Titanate (100) Surfaces: A Combination Kinetic and Spectroscopic Study
journal, October 2017

Perovskites and metal nitrides as catalysts in the base-catalysed aldol addition of isobutyraldehyde to formaldehyde
journal, January 2016

Surface and structure characterization of some perovskite-type powders to be used as combustion catalysts
journal, November 1995