Title: Improvements to the Ion Doppler Spectrometer Diagnostic on the HIT-SI Experiments

An Ion Doppler Spectrometer diagnostic system measuring impurity ion temperature and velocity on the HIT-SI and HIT-SI3 spheromak devices has been improved with higher spatiotemporal resolution and lower error than previously described devices. Hardware and software improvements to the established technique have resulted in a record 6.9 µs temporal and <=2.8 cm spatial resolution in the midplane of each device. These allow C III and O II flow, displacement, and temperature profiles to be simultaneously observed. With 72 fused-silica fiber channels in two independent bundles, and an f/8.5 Czerny-Turner spectrometer coupled to video camera, frame-rates of up to ten times the imposed magnetic perturbation frequency of 14.5 kHz were achieved in HIT-SI, viewing the upper 1/2 of the midplane. In HIT-SI3 frame-rates of up to eight times the perturbation frequency were achieved viewing both halves of the midplane. Biorthogonal Decomposition is used as a novel filtering tool, reducing uncertainty in ion temperature from <=13 to <=5 eV (with an instrument temperature of 8-16 eV), and uncertainty in velocity from <=2 to <=1 km/s. Doppler shift and broadening is calculated via the Levenberg-Marquart algorithm, after which errors in velocity and temperature are uniquely specified. Axisymmetric temperature profiles on HIT-SI3 for Cmore » III peaked near the inboard current separatrix at approximately 40 eV are observed. Axisymmetric plasma displacement profiles have been measured on HIT-SI3, peaking at approximately 6 cm at the outboard separatrix. Both profiles agree with the upper half of the midplane observable by HIT-SI. With its complete midplane view, HIT-SI3 has unambiguously extracted axisymmetric, toroidal current dependent rotation of up to 3 km/s. Analysis of the temporal phase of the displacement uncovers a coherent structure, locked to the applied perturbation. Previously described diagnostic systems could not achieve such results.« less 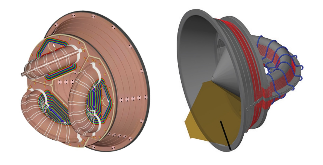 Figure 1: HIT-SI3 (left) and HIT-SI (right) flux conservers cut away at the toroidal midplane. Helicity injectors are shown, with flux coils (blue on HIT-SI and white on HIT-SI3) and voltage coils (red on HIT-SI and multicolored on HIT-SI3) shown separately. On HIT-SI, the second injector (‘Y’) opposes the picturedmore » one (‘X’), rotated 90° toroidally. On HIT-SI3, all injectors (‘A’,‘B’, and ‘C’) are pictured.« less
All figures and tables (14 total)
Export Metadata
Save to My Library
You must Sign In or Create an Account in order to save documents to your library.

An Algorithm for Least-Squares Estimation of Nonlinear Parameters
journal, June 1963

A method for the solution of certain non-linear problems in least squares
journal, January 1944

The biorthogonal decomposition as a tool for investigating fluctuations in plasmas
journal, October 1994

The role of a fast ion component on the heating of the plasma bulk
journal, February 2007

Experimental Stark Widths and Shifts for Spectral Lines of Neutral and Ionized Atoms (A Critical Review of Selected Data for the Period 1989 Through 2000)
journal, September 2002

Validation of single-fluid and two-fluid magnetohydrodynamic models of the helicity injected torus spheromak experiment with the NIMROD code
journal, August 2013