The topography and continental configuration of East Asia favor the year-round existence of storm tracks that extend thousands of kilometers from China into the northwestern Pacific Ocean, producing zonally elongated patterns of rainfall that we call “frontal rain events.” In spring and early summer (known as “Meiyu Season”), frontal rainfall intensifies and shifts northward during a series of stages collectively known as the East Asian summer monsoon. Using a technique called the Frontal Rain Event Detection Algorithm, we create a daily catalog of all frontal rain events in east China during 1951–2007, quantify their attributes, and classify all rainfall on each day as either frontal, resulting from large-scale convergence, or nonfrontal, produced by local buoyancy, topography, or typhoons. Our climatology shows that the East Asian summer monsoon consists of a series of coupled changes in frontal rain event frequency, latitude, and daily accumulation. Furthermore, decadal changes in the amount and distribution of rainfall in east China are overwhelmingly due to changes in frontal rainfall. We attribute the “South Flood–North Drought” pattern observed beginning in the 1980s to changes in the frequency of frontal rain events, while the years 1994–2007 witnessed an uptick in event daily accumulation relative to the restmore » of the study years. This particular signature may reflect the relative impacts of global warming, aerosol loading, and natural variability on regional rainfall, potentially via shifting the East Asian jet stream.« less

Journal Name:
Proceedings of the National Academy of Sciences of the United States of America

Publisher:
Proceedings of the National Academy of Sciences

Search WorldCat to find libraries that may hold this journal
Cited by: 5 works
Citation information provided by
Web of Science 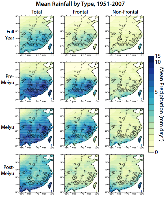 Abrupt change of the mid-summer climate in central east China by the influence of atmospheric pollution
journal, October 2001

Large-Scale Circulations Associated with the East Asian Summer Monsoon and the Mei-Yu over South China and Taiwan [東アジアの夏季モンスーンと華南および台湾における梅雨に伴う大規模な大気循環]
journal, January 1994

APHRODITE: Constructing a Long-Term Daily Gridded Precipitation Dataset for Asia Based on a Dense Network of Rain Gauges
journal, September 2012

The Impact of Aerosols on the Summer Rainfall Frequency in China
journal, June 2008

An Interdecadal Change in Southern China Summer Rainfall around 1992/93
journal, May 2010

Changes in the Distribution of Rain Frequency and Intensity in Response to Global Warming
journal, November 2014

Radiative forcing due to major aerosol emitting sectors in China and India: AEROSOL FORCING IN CHINA AND INDIA
journal, August 2013

Toward reconciling the influence of atmospheric aerosols and greenhouse gases on light precipitation changes in Eastern China: AEROSOLS AND GREENHOUSE GASES
journal, May 2016

Changes in Characteristics of Late-Summer Precipitation over Eastern China in the Past 40 Years Revealed by Hourly Precipitation Data
journal, June 2010

Southward displacement of the upper atmosphere zonal jet in the eastern north Pacific due to global warming: North Pacific Jet due to Global Warming
journal, November 2014

Shift in the summer rainfall over the Yangtze River valley in the late 1970s: SUMMER RAINFALL SHIFT IN THE LATE 1970S
journal, May 2002

Meiyu in the middle and lower reaches of the Yangtze River since 1736
journal, January 2008

Orographic Controls on Climate and Paleoclimate of Asia: Thermal and Mechanical Roles for the Tibetan Plateau
journal, April 2010