The collapse or merging of individual plumes of direct-injection gasoline injectors is of fundamental importance to engine performance because of its impact on fuel–air mixing. But, the mechanisms of spray collapse are not fully understood and are difficult to predict. The purpose of this work is to study the aerodynamics in the inter-spray region, which can potentially lead to plume collapse. High-speed (100 kHz) particle image velocimetry is applied along a plane between plumes to observe the full temporal evolution of plume interaction and potential collapse, resolved for individual injection events. Supporting information along a line of sight is obtained using simultaneous diffused back illumination and Mie-scatter techniques. Experiments are performed under simulated engine conditions using a symmetric eight-hole injector in a high-temperature, high-pressure vessel at the “Spray G” operating conditions of the engine combustion network. Indicators of plume interaction and collapse include changes in counter-flow recirculation of ambient gas toward the injector along the axis of the injector or in the inter-plume region between plumes. Furthermore, the effect of ambient temperature and gas density on the inter-plume aerodynamics and the subsequent plume collapse are assessed. Increasing ambient temperature or density, with enhanced vaporization and momentum exchange, accelerates the plumemore » interaction. Plume direction progressively shifts toward the injector axis with time, demonstrating that the plume interaction and collapse are inherently transient.« less

Search WorldCat to find libraries that may hold this journal
Cited by: 6 works
Citation information provided by
Web of Science 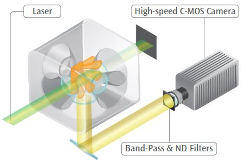 Figure 1: Illustration of the constant-volume vessel, the 8-plume spray and the PIV optical setup.
All figures and tables (19 total)
Export Metadata
Save to My Library
You must Sign In or Create an Account in order to save documents to your library.

A Comparison of Experimental and Modeled Velocity in Gasoline Direct-Injection Sprays with Plume Interaction and Collapse
journal, March 2017

Investigation on the Characteristics of Diesel Spray : Shape of Multiple Diesel Sprays and Air Movement between Neighbouring Sprays
journal, January 1982