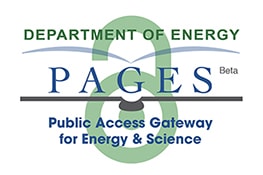 In April 2012, The Economist ran a biting editorial arguing that, “[w]hen research is funded by the taxpayer or by charities, the results should be available to all without charge.”  Academic journals, the magazine contended, were raking in huge profits by selling content that was supplied to them largely for free and in the process restricting public access to valuable research to just those willing to pay for subscriptions.  The answer to this “absurd and unjust” situation, The Economist wrote, is “simple”: governments and foundations that fund research “should require that the results be made available free to the public.”

We at the Department of Energy (DOE) Office of Scientific and Technical Information (OSTI) have found that providing full public access to the research DOE funds is simple in principle and complex in practice.  And reflecting on this 2012 editorial, we can say that a great deal of progress has been made toward reaching the goal of free public access it sets out.  And much of that progress is due to hard collaborative work by both the government and publishers.

Following the February 2013 memo from the Office of Science and Technology Policy (OSTP) on “Increasing Access to the Results of Federally Funded Scientific Research,” all major U.S. federal science agencies are now implementing public access plans, which comprehend both publications and data.

DOE was the first federal agency to gain OSTP approval of its plan – in July 2014.  DOE’s early implementation is a result of the longstanding scientific and technical information (STI) program and infrastructure managed by OSTI since the days of the Atomic Energy Commission.  OSTI has systems in place for providing public access to over 40,000 research items per year resulting from DOE’s $11 billion research and development (R&D) budget.  Such outputs include technical reports, conference papers, and patents, as well as metadata for journal articles and datasets.  With this infrastructure in place, implementing public access to the full text of journal articles (or the accepted manuscripts) was an incremental, not a revolutionary change.  After a 12-month embargo period, or as we like to call it, “administrative interval,” the accepted manuscripts are made freely available through the OSTI-hosted DOE Public Access Gateway for Energy and ScienceBeta, or DOE PAGESBeta.

OSTP encouraged agencies to work together and also to engage in public-private collaboration.  DOE does both.  OSTI partnered with the National Science Foundation and the Department of Defense, who wished to deploy PAGES-like features in their public access solutions.  Combined, the three agencies’ research funding results in roughly 80,000 journal articles per year, or nearly half the output of the entire U.S. government’s research investments.  As a complement to the key feature of authors submitting accepted manuscripts, these agencies are also taking advantage of the public access contributions of publishers.  Through the publisher consortium CHORUS – the Clearinghouse for the Open Research of the United States, these agencies receive metadata for full-text publications and provide direct links to publisher websites as part of their public access search results.

DOE PAGESBeta employs both centralized and decentralized components.  Metadata is centralized, but much of the full-text content is reached by links to institutional repositories and to publisher websites.  OSTI maintains a dark archive of full text in the event content becomes inaccessible elsewhere.  This hybrid model suits DOE because it’s the same model OSTI has been successfully using for other kinds of STI from DOE lab researchers and grantees.

The other most common public access model, NIH’s PubMed Central (PMC), is more centralized.  In PMC, authors and participating publishers deposit all full text into the PMC central repository.

Whether distributed or centralized, however, the most common element in all federal agencies’ implementation of public access is the feature known as “author deposit.”  In the public/open access jargon, this is known as “green open access,” or “green OA.”

Green OA is the longstanding practice of the self-deposit by authors of accepted manuscripts to an institutional repository that is freely accessible.  Typically, there is a delay between the publication date and such author deposits, with the delay most commonly being 12 months.  Historically, this delay has been a function of publisher policy, but both through legislation and through the exercise of a retained license in the copyright, U.S. government agencies are implementing a 12-month post-publication delay before making accepted manuscripts freely accessible.

“Gold OA,” the flip side to green OA, is typically described as “author pays” rather than “author deposit.”  Authors or their institutions pay a fee to the publisher to make the article freely accessible immediately upon publication.  As this table distilled from the Registry of Open Access Repository Mandates and Policies (ROARMAP) shows, most funding agencies and governments around the world are implementing green OA models.  A few allow for either green or gold routes to satisfy their public access requirements, and only one funder (the UK Research Councils) specifies a preference for author pays when it’s an option.

Saying that U.S. agencies are implementing green OA models is not the same thing as saying that they prohibit gold OA.  The payment of gold OA fees by authors or their institutions is typically an allowable cost under most federal research grants and contracts.  However, DOE has made it clear to researchers that the payment of gold OA fees is not necessary in order to comply with our public access policy because we rely on author deposits of accepted manuscripts.

A key reason why DOE and other agencies prefer green OA is cost.  In the case of DOE, we estimate that a completely gold OA model would mean between $75 million to $90 million per year diverted from research.  That would provide funding for quite a few post-docs.

No model is perfect.  Green OA implies the need for some kind of embargo, so public access isn’t achieved immediately upon publication.  But we at DOE, along with all other U.S. federal agencies, consider green OA to be a reasonable compromise between immediate open access with gold OA charges and the attendant threat to the publishing industry where access is required immediately, without any charge or payback to publishers.

While it is difficult to quantify the commercial or scientific value of no embargo versus one 12 months long, there is a precedent and strong argument for federal agencies’ implementation of the 12-month embargo.  First, this is the timeframe successfully used by NIH for over eight years in PubMed Central, and this history has certainly informed subsequent legislation and OSTP’s February 2013 memo, which suggested a default embargo of 12 months.  It might be called the “grand compromise” of public access – a proven formula that has been good for science and the public while not harming scientific publishing.

Where access before 12 months is deemed essential, publishers, scientists, and libraries all provide options.  Scientists have always been allowed to share their works immediately on a peer-to-peer basis for scholarly purposes, and this has evolved in an electronic environment.  Publishers have options for enabling researchers to view individual articles, and libraries, especially research and academic libraries, understand and serve their communities’ needs.

The process of moving federally-funded R&D results from the lab to the public takes many forms.  Some of these forms (e.g., technical reports, preprints, and certain datasets) don’t require peer review, which makes dissemination less expensive.  Scholarly publications, however, undergo more rigor in the publication process, and there are naturally higher costs.  While the models for obtaining peer review and publishing peer-reviewed publications are evolving, it’s unlikely that these costs can be taken to zero.  OSTP and U.S. federal agencies appreciate the essential value and role of publishing and peer review (and their attendant costs).  At the same time, agencies are keen to focus their research funding on research.  Our green OA models are a proven, workable solution that achieves the objectives of public access while taking into account the multiplicity of interests involved in the scientific enterprise.

Dr. Jeffrey Salmon is Deputy Director for Resource Management in the DOE Office of Science.